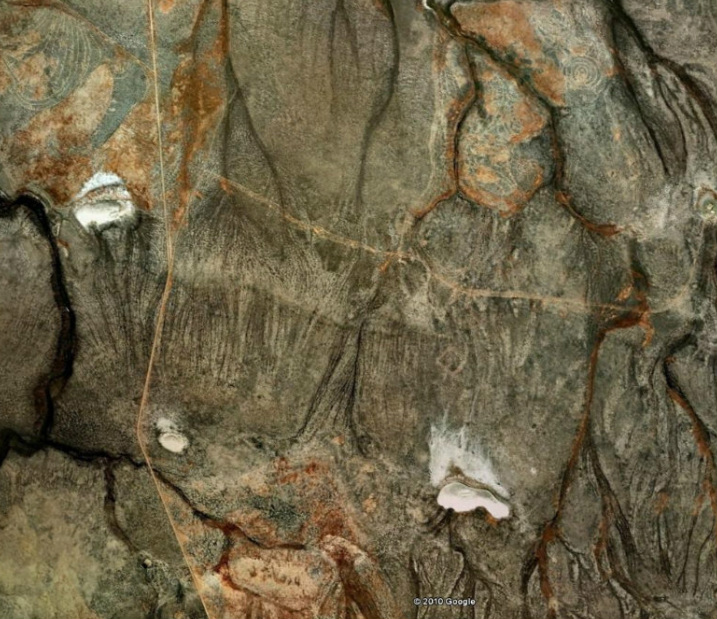 The following day after studying the spirals, I walked into my office where I had my computer screen up and noticed something very odd and almost unbelievable until I called my sons in the room and asked them what they saw and sure enough they saw the same thing I did.
There is a figure of a man with what looks like a pointed hat and possibly clothed in robes right next to the group of spirals.
As you can see he has the three spiral tattoos on the side of his face and might look of Asian descent. I know this sounds silly, but it looks as if he is also carrying some kind of a pack on his back?
My son told me he learned in school in some Japanese legends, they wore a "pack" on their backs symbolizing a carrier of "Universal Knowledge". To me that might coincide with him being next to all the spirals.
The Hatman is 2.07 miles in length from tip of hat to feet and sits over 100 ft off the ground or where the road is, I think it highly impossible for ATV's to get up there. 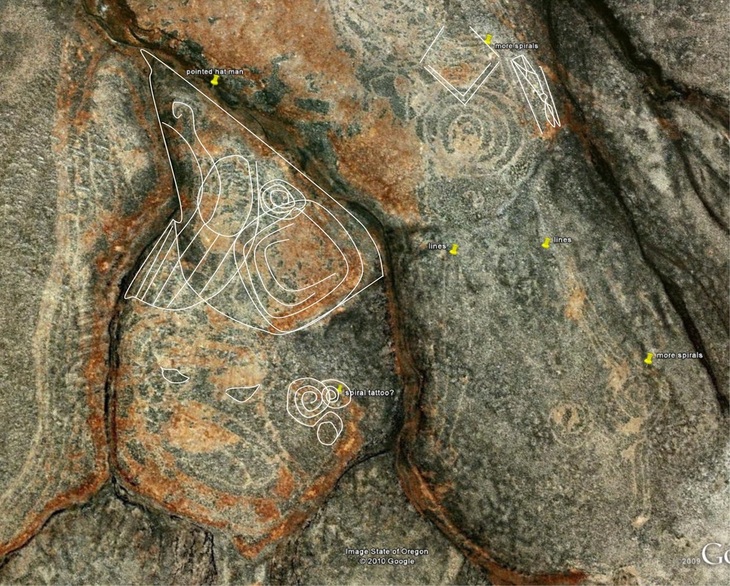 As you can see I tried my best to outline what I see without interfering with the images. The spiral configurations shown in The Spirals section are right next to his head. The three spirals from Spiral Image 5 are what looks like tattoos on his left cheek. He is clearly wearing a pointed hat with numerous configurations of lines and spirals depicted on it. To me, it feels like a story of cycles.
The following two images I converted to negatives as is with no drawing.
You can see both eyes and nose of the Hatman. It seemed to always help me to not only look up close at the images, but to step back a few feet from the computer. 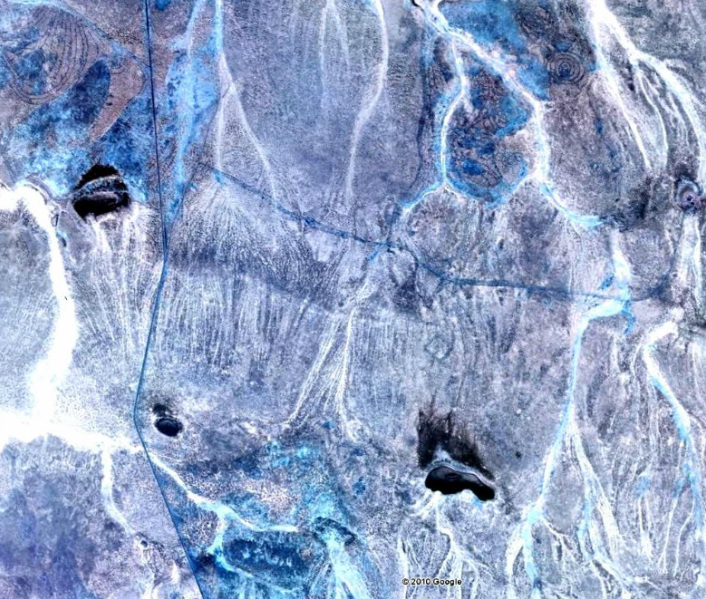 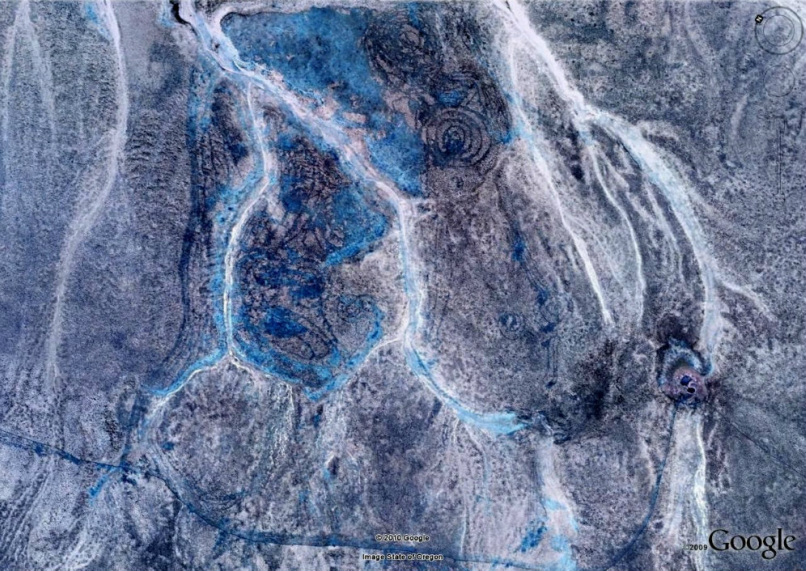 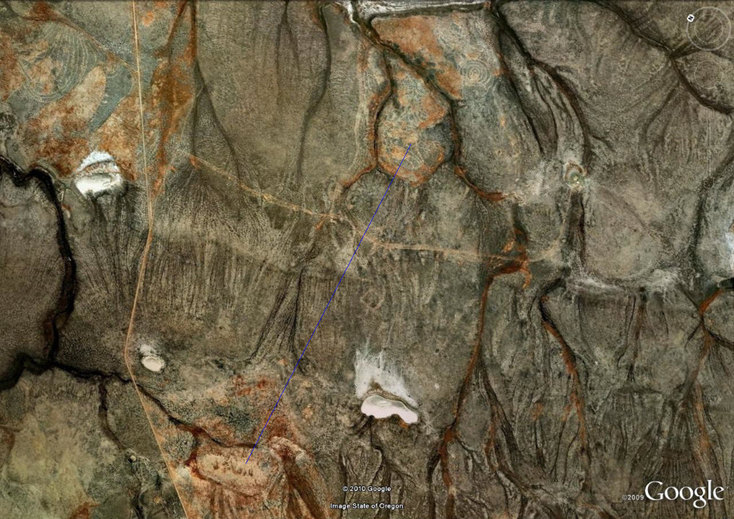 ​What intrigued me about the Hatman was the focus of his eyes, they didn't seem to be looking straight ahead of him, instead the focus seemed to be facing in a NW downward direction, so I followed it and it led me to what looks like possible ancient script of some kind. Measuring the possible script from letter to letter is 1280.86 feet in length and sits on flat ground.
Though this cannot be backed up scientifically, I happened to connect up with a woman from New Mexico who can apparently read rock art and petroglyphs from a higher level of consciousness. While speaking on the phone one day and going over the possible script the Hatman is looking at, she said when she goes into that higher state of consciousness (IF there was something valid there to read), she is not aware of what she is saying, so on an inner level if I hear or see anything when she read it, to let her know. Well, much to my surprise she began to speak in a language I could feel in my body was familiar and ancient and immediately saw a pyramid outlined in red light and heard the words......."On All That is Holy".

Recently, I came across an article that was quoted by Robert Temple, author of The Sirius Mystery that states:
"In Egyptian hieroglyphic writing, Sirius was depicted as a red triangle with a small semicircle and a five-pointed star near it." Remember this possible Sirius connection later.

The image below has been turned upside down and enhanced once by Microsoft Photodraw. 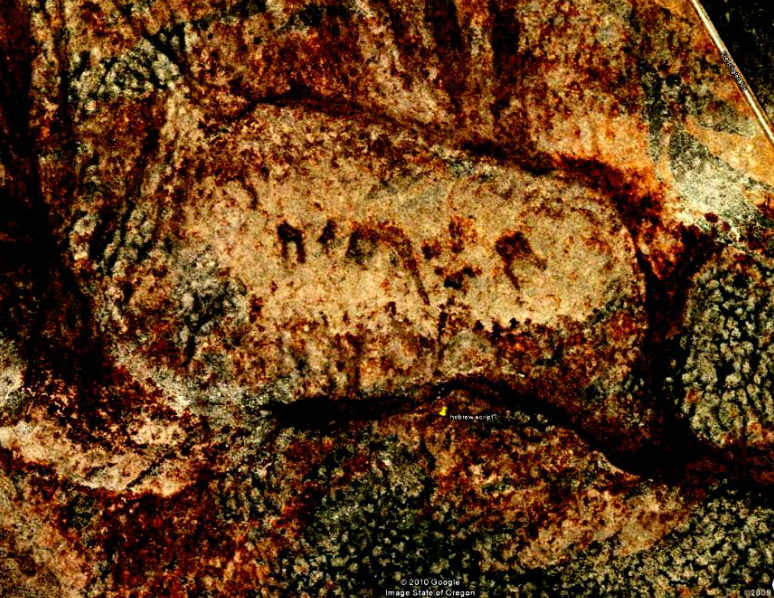