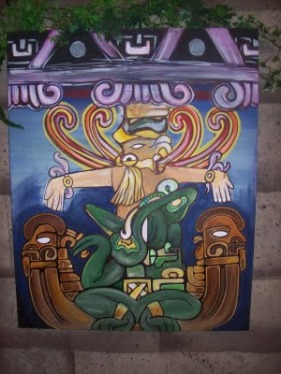 Izapa Stela 11
All information here has come from a collection of miscellaneous sources across the web. The Mayan culture has never officially released any information pertaining to the Shift other than little tidbits. In this new year of 2010 they are releasing a documentary called The Shift of the Ages........hopefully this will clear things up a bit. See www.shiftoftheages.com for more info.

Over the last ten years or so there has been massive interest in the Maya of Central America, especially their calendar systems that stretch back to ancient times. The Mayan Calendars are said to go back thousands of years, it is a system the Ancients used to keep track of time, events in the heavens, humanities evolutionary growth, etc.
According to some, the Maya Long Count Calendar indicates we are living within the end of a "galactic day" or time period spanning thousands of years. One galactic day is 25,625 years and is then divided into five cycles of 5,125 years. Some speculate on the Solstice on December 21, 2012, precisely at 11:11 AM Universal Time, marks the completion of the 5,125 year Great Cycle of the Ancient Maya Long Count Calendar.
According to Mayan Elder Don Alejandro no one knows for sure, "It is a period of the sun that is ending, and it is a cycle that lasts 5,200 years of the Gregorian years. And we know that we are in the last Katun. There are 13 Katuns and we are living at the end of the last one. So this is the time when we don't know exactly if it is going to be 2012 or if it is going to be later on. Because 2012 is a Gregorian date, sometimes it does not coincide with the Mayan calendar.
There are many reasons why we don't know exactly the timing. It has to do because when the invasion came, a little over 500 years ago, the men and women of wisdom were the first ones to be assassinated. Then Bishop Diego de Landa, during the invasion, gathered all the books where all the information was and they set them on fire. So they burned all the information. On the other hand, the calendar that was at that time in effect, they have gone through so many modifications. Like in this Mayan council, they left out days, they didn't count just to catch up with time. Then with the Gregorian Calendar, all the months are so irregular in length, like the months of 28 days, 30 days, 29 days, 31 days. So this is why it doesn't align. But one thing is for sure, it is certain that you all will know when this happens, because it is going to be a long period of darkness. It is a change of sun; it is another sun that is coming."
Following Mayan concepts of cyclic time and World Age transitions, this is as much about beginnings as endings. In fact, it was considered by the ancient Mayans to signify at the completion of each cycle begins the creation of a new World Age. 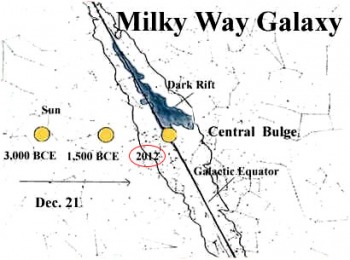 Many researchers are pinpointing the winter solstice of December 21, 2012, which happens to fall at the exact time of a galactic alignment with our sun, earth and galactic plane. According to researchers the Mayans believe when the sun crosses over the galactic plane it will begin a new world age and sun. 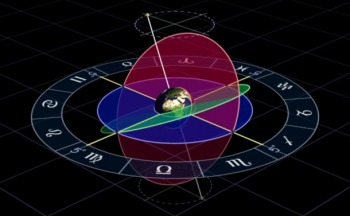 According to John Major Jenkins (www.alignment2012.com) and his essay, “What is a Galactic Alignment?” he explains, “The Galactic Alignment is the alignment of the December solstice sun with the Galactic equator. This alignment occurs as a result of the precession of the equinoxes, which occurs every 26,000 years.
Precession is caused by the earth wobbling very slowly on its axis and shifts the position of the equinoxes and solstices one degree every 71.5 years. 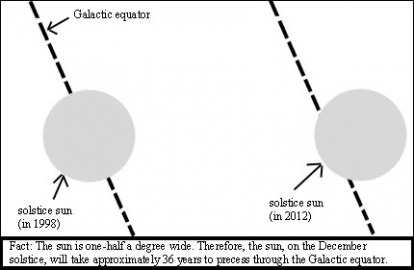 Because the sun is one-half of a degree wide, it will take the December solstice sun 36 years to precess through the Galactic equator. 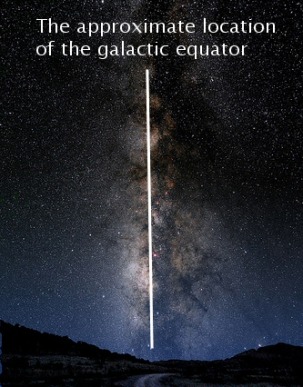 The Galactic equator is the precise mid-line running down the Milky Way. Analogous to the earth's equator, it divides the galaxy into two hemispheres, or lobes.

The ecliptic is the path followed by the sun, moon, and planets. It is the plane of our solar system. The ecliptic encircles the earth and is divided into twelve constellations, or zodiac signs.
The precise alignment of the solstice point (the precise center-point of the body of the sun as viewed from earth) with the Galactic equator was calculated to occur in 1998 (Jean Meeus, Mathematical Astronomy Morsels, 1997).
Thus, the Galactic Alignment  zone  is 1998 +/- 18 years = 1980 - 2016. This is era-2012 . 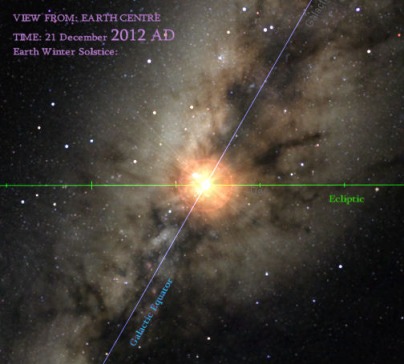 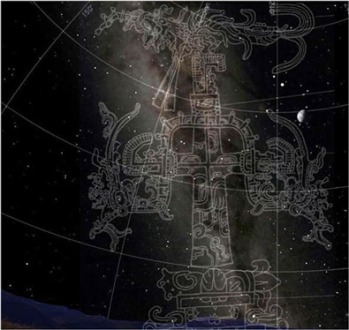 This Cross was also recognized by the Maya and was called the Crossroads or Sacred Tree.
Jenkins explains, "This entire region is embraced by what astronomers call the 'nuclear bulge' of the Galactic Center—the center of our Milky Way galaxy. As any amateur astronomer or naked-eye star gazer knows, this nuclear bulge is recognizable without the aid of radio telescopes. It is wider and brighter than other parts of the Milky Way. However, since the nuclear bulge is quite large, this definition is not as precise as saying, “the alignment of the December solstice sun with the galactic equator, which occurs in the range 1980 - 2016. This is the alignment zone I refer to with the term "era-2012".
Jenkins makes an interesting connection between this rebirth process or cyclic transition humanity and the planet are in and the ancient monuments of Izapa, which is a very large pre-Columbian archaeological site located in the Mexican state of Chiapas.
In his description of one of the monuments of Izapa, Jenkins states, "The birth canal between the legs of the throne figure is analogous to the dark-rift in the Milky Way. This “black cleft” feature is called by the modern Quiché Maya the Xibalba Be . Generally, as an underworld portal, it is related to the complex of motifs assigned to the jaguar’s mouth, serpent mouths, caves, cenotes, a woman’s birth canal, temple doorways, and so on. A significant equation in this mythic complex is the “dark-rift as birth canal,” for it is through the birth canal of the Milky Way that the solstice sun will be reborn in the years around 2012.
" He goes on to say, “Maya mythology helps us understand how to think about this profound alignment in A.D. 2012. We can think of the Galactic Center as the Cosmic Mother's womb, from which everything has sprung. For that is, in fact, what it is. We may think of the December solstice sun as the Cosmic Father, for without the solar rays of life from Sol, our cosmic father, life on earth would not exist. Though the Maya were scientifically and astronomically advanced, they also conceived of astronomical objects in these cosmological or mythological ways, for they did not separate science and religion. In fact, as I explore in my book Maya Cosmogenesis 2012, the First Father deity in the Maya Popol Vuh Creation myth, called One Hunahpu, symbolized the December solstice sun. In the Popol Vuh, One Hunahpu is resurrected at the end of the World Age, and is instated as the new World Age ruler.
This, I argue, is a mythological telling of the astronomical convergence that occurs on the 13-baktun end-date in 2012. One Hunahpu's rebirth occurs when the December solstice sun is reborn at its conjunction with the Cosmic Mother's womb (the Galactic Center). And a new World Age then dawns. Likewise, although I can't go into the mythic dimensions of the end-date cosmology in detail here, the Maya thought of the Milky Way as the Cosmic Mother. These mytho-astronomical ideas are recorded on monuments at the early Maya site of Izapa, the place where both the Long Count calendar and the Popol Vuh Creation myth were created about 2,000 years ago." 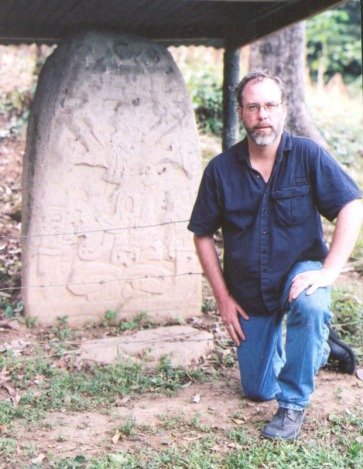 John Major Jenkins Stela 11 Izapa 1998
For example, Izapa Stela 11 depicts the First Father deity (One Hunahpu) in the  mouth  of the Milky Way deity (i.e., the Galactic Center). Amazingly, this 2,100 year old carving is a mythological portrayal of the 2012 alignment.
By returning to this alignment once again after 26,000 years, our Sun, Earth and humanity aligns itself with the higher frequencies of the galaxy, consequently this action moves us into a higher octave or dimension and way of being. As all life enters the increased stages of heightened vibrational frequencies, there lies the choice.

In Love and Respect,
Patricia Summers