From, "The Thanksgiving Ceremony" pg. 41

In the ancient port of Panuco came the traders who brought copper down from the Northland (Lake Superior) to the Southern Sea and Sunrise Ocean. It was here the pale prophet learned their language and received an invitation to ride into the Puan cities. "From their name He knew these people to be a lost colony from Pahn, the sunken Red Land and He was most anxious to meet them."
"These ships of the traders were made from a great log slowly hollowed out by fire and patiently chipped until they could hold many rowers. Even into the time of the white man have come these fleets of the traders, as Father Mercier in his travels with the explorers has so faithfully described them. Thus the Healer rode northward to an extensive city in the land now known as Georgia. It once had a name which was changed to E-See-Co-Wah, which means the Lord of Wind and Water. Here He built a pyramid-temple with painted logs as was the Puan custom and dedicated it to Our Father, the Great Spirit."
The people told Him they were in a hurry to finish because they had a big feast coming called the Thanksgiving Ceremony. With His twelve prophets there, He asked if it was the same as in Panuco, only theirs took place a moon later and they replied, "Yes, it is the same. It celebrates the safe arrival of Votan from the burning Red Land. His fleet came first to Massachusetts and they celebrate a moon earlier." Most intrigued with the story the Healer stated; "I would hear more of the story."
"It is said that when the young prince of the House of Votan with his large fleet first touched the firm earth, all did kneel and kiss the sweet ground with the grass growing on it and sent up a prayer of thanksgiving. Since that time each place which the fleet touched in turn has its Thanksgiving Ceremony. During the feat which follows, we eat of the plants which he brought with him: we eat the corn, beans, red tomatoes, the squash and mashed potatoes. We have melons with rich ripe strawberries and other berries. We drink of the delicious chocolate. For meat we have the deer, buffalo or the bird called Turku (turkey) for all these came from the Old Red Land now long lost in the floods of the Great Destruction."
Following the story, the Prophet gave the rite His blessing and made it one of the Feasts of the Temple.

"(See Bancroft and others.)" 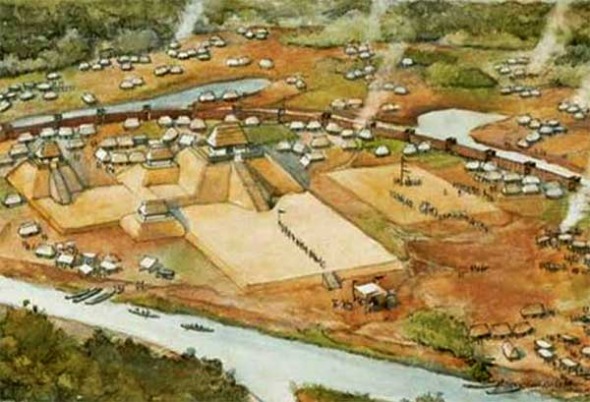 "It was during this rite of dedication of the Pyramid Temple in the place now called Etowah, Georgia, the Prophet first mentioned the future"....... "Afar off through time My Spirit is walking down the cycles of the future. I see the armies of the Serpents moving northward from their cities being driven out by bloody warfare. These ancient worshipers of the Fire have returned to the ways of their fathers and once more are sacrificing to idols. They are coming up the river, the Serpents led by the Turtle. The Puan people will move northward and an uneasy peace shall for some time follow, but a civil war will break out among them. Now if you could only convert these people once more to the Peace religion of the One God and also those who are coming down from the northward along the Sunset Ocean, then what follows might be different. But I fear that you cannot. Civil war becomes anarchy and each city takes to the forest, joining in tribes for senseless warfare. Remember this and tell your children, Woe follows this unhappy decision."
"Farther off there is another invasion. In ships many bearded men are coming from across the Sunrise Ocean. Many are the ships as the snowflakes of winter. I see these men taking the Broad Land and the Mounds which hold the crests of our cities are for them, alas!, but earth for the taking. They do not respect our trees of cedar. They are but hungry, unenlightened children and with them the vision closes."
"Would that I could reach those war-hungry Serpents! Would that I could speak to those bearded farmers! I have tried, they do not hear me. They go on their way like spoiled children, while I return to you and the present here at the Temple at E-See-Co-Wah!" (Time travel - bi-locate?)
"Many Southern tribes in Oklahoma with the mingled heritage of Puan and Serpent still remember this prediction first spoken at the Temple in Georgia so long ago. Choctah, Cherokee, Chickasaw and Creek..........
Do your children still remember? Or have the old chants been forgotten as they have among so many others?"

Traditional Chant given by the Prophet to the Shawnee:

There used to be a massive Puant city in what is today known as Oklahoma....translated from the native language means the "Land of the Red Man". When the Healer arrived he again changed the temples, chose from the priesthood His twelve disciples and taught the people. It was this time when the Healer was asked about his childhood.
"He told them that He was born across the ocean in a land where all men were bearded. In this land He was born of a virgin on a night when a bright star came out of the heavens and stood over His city. Here too the heavens opened and down came winged beings singing chants of exquisite beauty."
"When the University of Oklahoma was digging in the Spiro Mound, much pottery was discovered which showed winged beings singing and here was also the hand with the cross through the palm, about which the professors were deeply puzzled and still have no explanation as they stare at these things in their museums.
To these people He was known as Chee-Zoos, the Dawn God. "They smoke the Sacred Peace Pike in His memory and blow to the four directions, knowing that to each man comes his retribution, no matter how flows the river of history."

"(Note:  See the various scientific reports on the Oklahoma Spiro Mound.)"
(This was written in 1963) 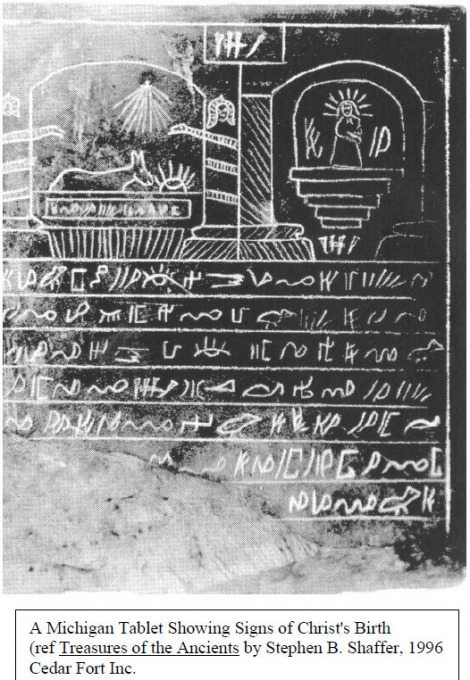 What Creator was already doing on Turtle Island..........

"Twelve men were coming towards me, and they said: 'Our Father, the two-legged chief, you shall see!' They led me to the center of the circle where once more I saw the holy tree all full of leaves and blooming.   But that was not all I saw.  Against the tree there was a man standing with arms held wide in front of him.  I looked hard at him, and I could not tell what people he came from. He was not a Wasichu (White Man) and he was not an Indian.  His hair was long and hanging loose, and on the left side of his head he wore an eagle feather.  His body was strong and good to see, and it was painted red.  I tried to recognize him, but I could not make him out.  He was a very fine-looking man.  While I was staring hard at him, his body began to change and become very beautiful with all colors of light, and around him there was light.  He spoke like singing: "My life is such that all earthly beings and growing things belong to me.  Your father, the Great Spirit, has said this.  You too must say this....As I was sitting up, and the people were crowding around me to ask what vision I had seen.  I told my vision through songs, and the older men explained them to the others.  I sang a song, the words of which were those the Wanekia (Savior) spoke under the Flowering Tree."

This section to be completed......Please come back soon!
Thank you!