The Star Systems and Alignments 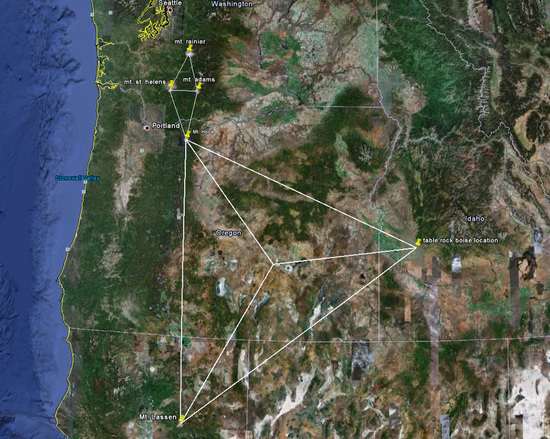 Back in 2004 when the  Indonesian tsunami took place, it triggered an "opening" within me where I entered the world of grid systems and sacred geometry I knew nothing about. In addition, I found while looking at maps I began to sense an accumulation of intense high energy in particular locations on the planet, then went about connecting the significant locations such as mountains or ancient sites; into what I call "etheric pyramid complexes" or "pyramid grids". Both subjects have their own sections in this website if interested in reading more.
And Oregon was no different........Alignments are as follows:
Mt. Hood, OR
Mt. Lassen, CA
Table Rock, ID

The faces at the Tri-Complex are located in the center of the large sacred grid. 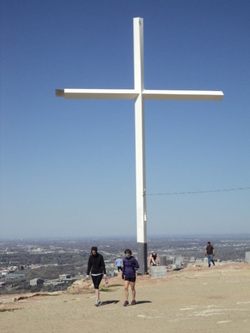 While researching Table Rock, Idaho, I came across an article that discusses an illuminated 60-foot cross at Table Rock's summit. The cross itself stands on four square feet of land bought by the Jaycees for $100 in 1972.
The sacred site known as Table Rock, was a ceremonial plateau with hot springs on most sides, and the Castle Rock formation nearby.
According to J. Summers Duffy from The College of Id. Museum Natural History......
"THE MAJESTIC PLATEAU CALLED TABLE ROCK AND SURROUNDING CASTLE ROCK AREA, WAS THEN, AND STILL IS A SACRED BURIAL PLACE FOR THE SHOSHONE BANNOCK TRIBAL PEOPLE, ACCORDING TO THEIR LEGENDS. CASTLE ROCK AND TABLE ROCK HOLD GREAT CULTURAL AND RELIGIOUS SIGNIFICANCE FOR ALL NATIVE AMERICANS AND PEOPLE WITH A LOVE FOR THE LAND. THE BURIAL GRAVES OF THESE NATIVE ANCESTORS CONNECTED THEM TO THE LAND, AND THE LAND WAS THE MOST IMPORTANT PART OF LIFE IN THE ANCIENT SPIRITUAL WORLD". 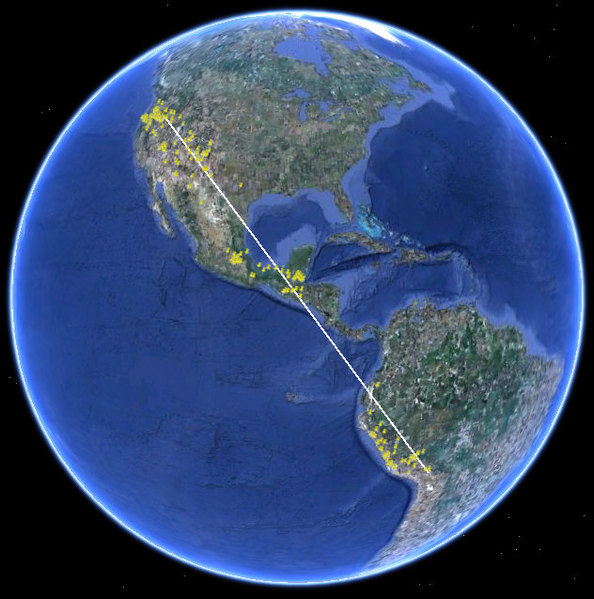 Ancient Route Pacific Northwest to Peru
Throughout the entire time going over the land finding these configurations in Oregon, I kept sensing there was a connection or ancient route that somehow connected this site to Tiahuanacu in Peru, it was just an intuitive feeling, but an extremely strong one.
I drew a line from the center of the tetrahedron to Peru, but no this was not it.
Then I had a flash of the Angel, so I drew a line from her throat (the odd triangle intentionally sticking out at her throat) down to the gate at Tiahuanacu and all the hair on my arms and neck stood straight up and I knew that was it.
This possible ancient "route" goes right through some of the most significant sites in the America's (marked in yellow) and I'm sure dozens more I have not marked.
In Utah, it runs right through Cathedral Valley, Mt. Ellen, Valley of the Gods, Temple of the Sun, Solomon's Temple and to it's west is Capitol Reef, to it's east is Glen Canyon.
In Arizona, it is a jump away to the center of the Four Corners and Monument Valley is only a few miles away.
In New Mexico, it runs through Carlsbad Caverns, Navajo and Mescalero reservations, Shiprock and Chaco Canyon are not too far.
Central America, it runs through Palenque, Coban, Guaytan Ruins. Kaminal Juyu and Copan complexes are on either side of line.
In South America, it runs 50-100 mi. east of the Machu Picchu complexes in the Sacred Valley, down through Lake Titicaca straight to Tiahuanaku gate. The Aramu Muru Portal is about 33 miles west across the lake. 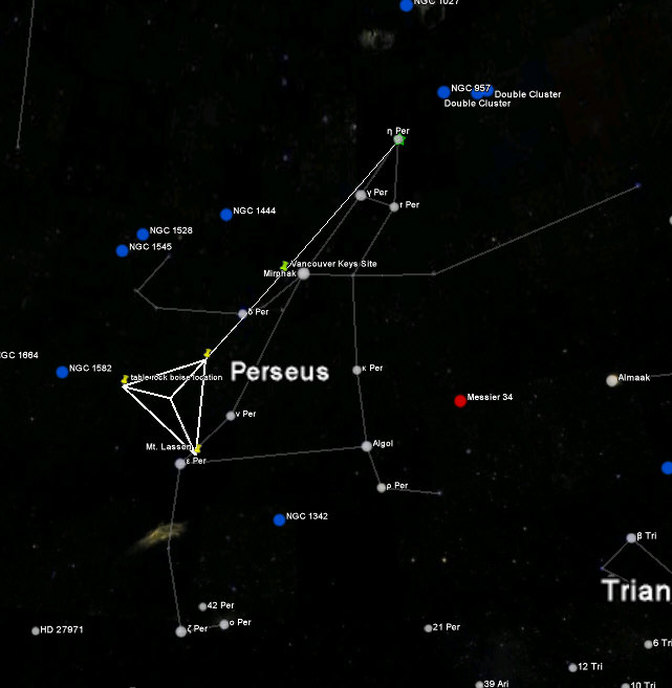 I discovered on Google Earth it has an option to look at the constellation map/star map in current time.....I kept marks I made and converted it to the star map.
This particular location in Oregon happens to fall in Perseus in August with Mt. Lassen sitting on his knee.
I discovered the alignment from the center of the sacred grid goes straight through Mt. Hood to the tip of Perseus' Hat!  This can't be a co-inky-dink..........Perseus has a pointed hat, just as many of the faces do in Oregon.
The tip of Perseus' Hat is in the Gulf of Alaska.....
Please take note: All alignments that follow in this research pertaining to star systems are concluded by the first star it aligns with.

Below is an image of Perseus' star system on the west coast of North America with the alignment from the center of the tetrahedron to the tip of Perseus' pointed hat. 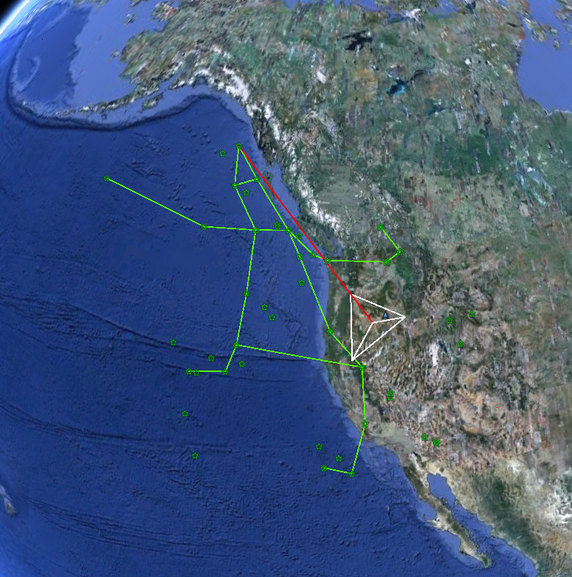 The very day I found this Perseus alignment, I heard on the nightly news the Perseid Meteor Showers began.....this was August, 11, 2010.
This reminded me of the day I found the Angel and a man witnessed orange orbs going into Summer Lake as mentioned earlier. Fun co-inky-dinks. 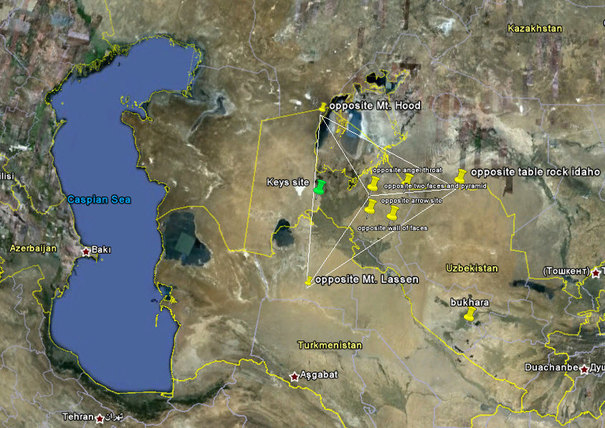 Bukhara Opposite location to Oregon site
Through my experiences with grid systems and sacred geometry, I have come to be a firm believer that whatever takes place in one location on the planet or our constellations, there is a direct effect in the opposite location.
I located the exact opposite location on the planet to the Oregon site (not antipodal) and it turned out to be in Uzbekistan right near the Aral Sea.....Come to find out this is close to where ancient Bukhara and ancient Persia territory where there was once a great library or University likened to Alexandria.
"---Rudaki Dehkhoda defines the name Bukhara itself as meaning "full of knowledge", referring to the fact that in antiquity, Bukhara was a scientific and scholarship powerhouse. Rumi verifies this when he praises the city as such:

"Bukhara was a mine of knowledge."

"Of Bukhara is he who possesses knowledge."

Okay, so I go back to look something up in Oregon and when I clicked for the star map to come up, it came up on the opposite side where all the ancient Persian opposite sites are in relation to Oregon.........
I was quite surprised....The opposite location aligns in Hercules on the star map, which is opposite to Perseus. Perseus is considered to be the father of ancient Persia and related to Hercules.
According to Wikipedia........http://en.wikipedia.org/wiki/Perseus "Perseus and Andromeda had seven sons: Perses, Alcaeus, Heleus, Mestor, Sthenelus, Electryon, and Cynurus, and two daughters, Gorgophone, and Autochthoe. Perseus was left in Aethiopia and became an ancestor of the emperors of Persia. The other descendants ruled Mycenae from Electryon down to Eurystheus, after whom Atreus got the kingdom.
However, the Perseids included the great hero, Heracles, stepson of Amphitryon, son of Alcaeus. A statement by the Athenian orator, Isocrates[21] helps to date Perseus roughly. He said that Heracles was four generations later than Perseus, which corresponds to the legendary succession: Perseus, Electryon, Alcmena, and Heracles, who was a contemporary of Eurystheus. Atreus was one generation later, a total of five generations."

Ancient Bukhara and opposite location to Oregon in Hercules on starmap
Note that Hercules body covers the majority of the sacred Himalaya range and Tibet and his leg drops down right through the center of India. 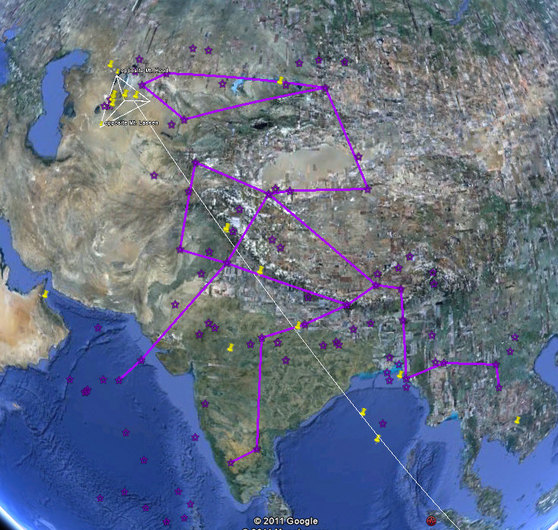