Next is Central America.
You will see the tip of the Four Corners sacred grid flows right into Central America at Palenque. In addition, the ancient route runs right through the center as seen below with the white line. 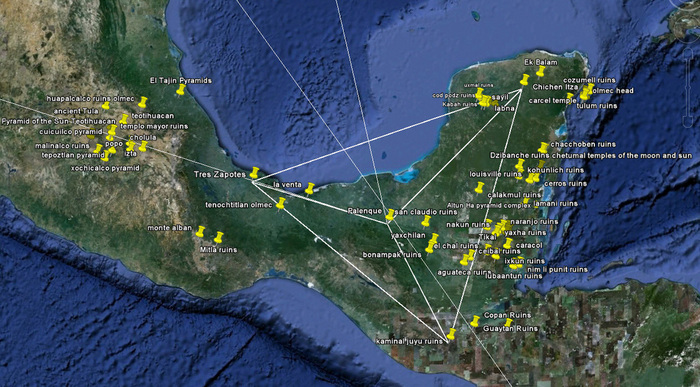 Palenque Sacred Grid
I switched the earth map to the star map on Google Earth and quickly learned Central America incredibly falls right in Orion's sword.
Below in Orion's hand or sword is the Yucatan region and Chichen Itza is the north node or point in this sacred grid. 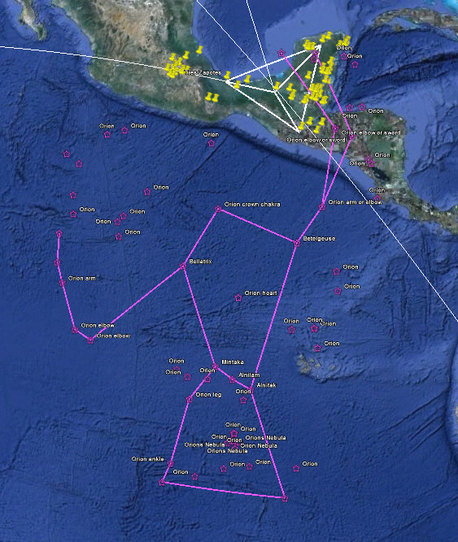 Palenque sacred grid in Orion
Extending from the Palenque grid, the Four Corners sacred grid begins and flows into Pleiades/Taurus and Capella in Auriga with Mescalero Reservation and Auriga Star in center. From there the route goes through main Four Corners sites into Oregon, the Pacific Northwest region and Perseus. 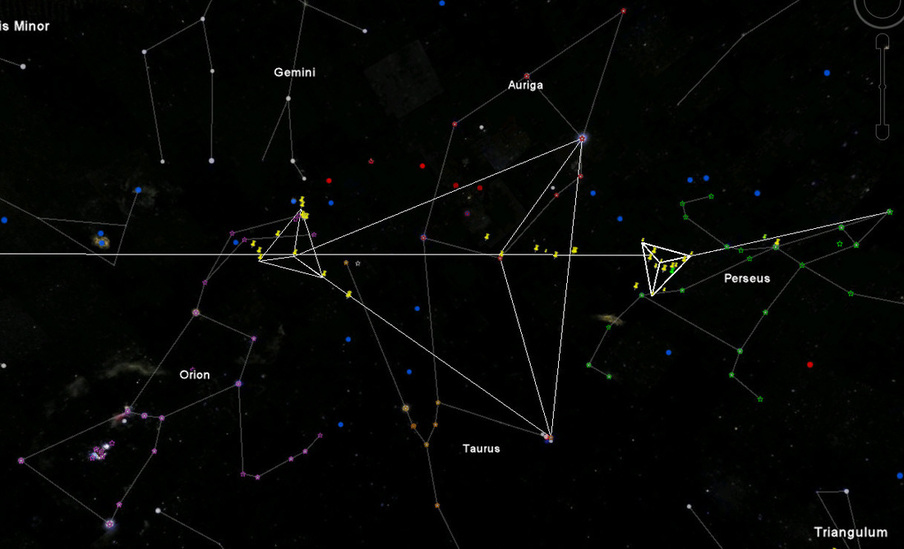 Central America in Orion star map
Below is the Central American sacred grid connected to the Four Corners sacred grid and ancient route extending south. As you can see, the tip of Orion's sword is in the Yucatan near Chacmultun ruins. 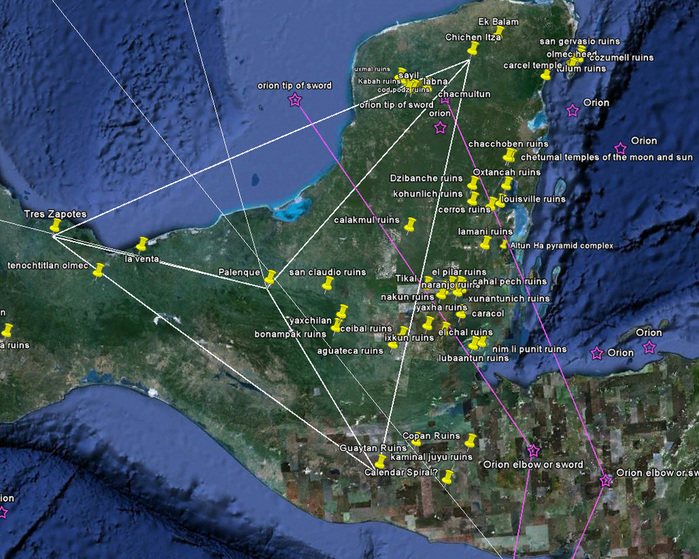 Opposite Sacred Grid to Palenque...Bay of Bengal 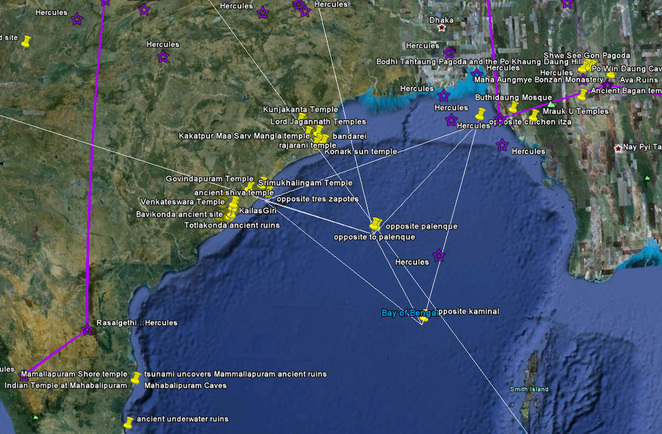 Bay of Bengal Sacred Grid opposite to Palenque Sacred Grid
In the Bay of Bengal sacred grid there are countless temples and ancient sites on land, way too many to list as specific alignments. There are several underwater ruins as well.
The areas in which the nodes in the sacred grid falls are:

West point: Orissa and Andrha Pradesh area
East point:  Rakine and Saint Martins Island area, Bangladesh and Myanmar region.
In the Bay of Bengal grid, Hercules is kneeling in Myanmar near the Mrauk U Temples. Mrauk U is an archaeologically important town in northern Rakhine State, Myanmar. A popular myth amongst the Arakanese and the Burmese people is that the name Mrauk U was derived from a legend of a monkey offering Gautama Buddha an egg as a sign of devotion. From this legend, it is purported that the name Monkey Egg (Myauk U) stuck with the region, and from it, the current Mrauk U was derived.
At its zenith, Mrauk U was the centre of a kingdom which stretched from the shores of the Ganges river to the western reaches of the Ayeyarwaddy River. According to popular Arakanese legend, there were 12 'cities of the Ganges' which constitute roughly half of modern day Bangladesh which were governed by Mrauk U.
As Mrauk U and her kingdom prospered, the kings, ministers and peasants built many pagodas and temples around the town to reflect their faith. Thus, Mrauk U houses a rich collection of temples and pagodas second only to the Central Burmese town of Bagan, in Myanmar.
The most notable temples in Mrauk U are the Shite-thaung Temple (Temple of 80,000 Images or Temple of Victory), Htukkanthein Temple (Htukkan Ordination Hall), the Koe-thaung Temple (Temple of 90,000 Images) and the Five Mahn pagodas.
Today, Mrauk U is a major archaeological and tourist destination.[8] The main attractions are the temples and ruins around the town.
http://en.wikipedia.org/wiki/Mrauk_U 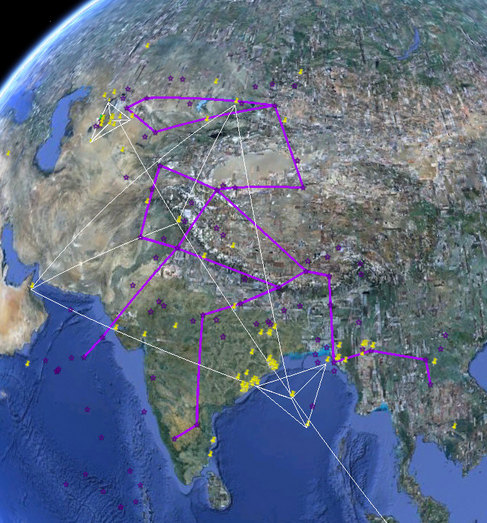 Hercules kneels in the Bay of Bengal, Bangladesh
As you might notice, Hercules who battles most of the "bad guys" in the constellations, with the head of Draco next to his sword......covers all three Sacred grids. 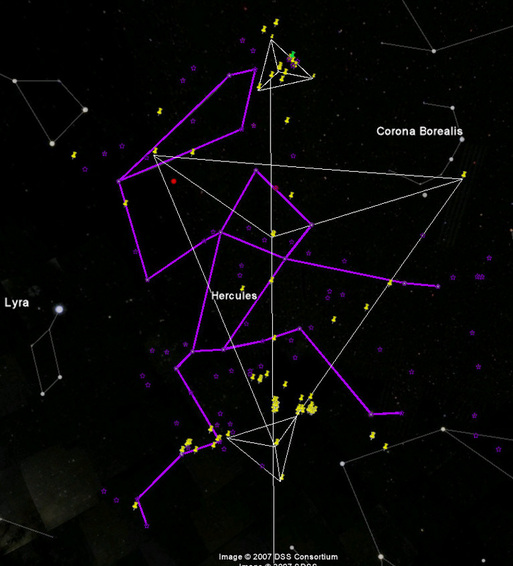 Hercules kneeling in Bay of Bengal while his body is centered in the Central Asian/India sacred grid, with sword next to the Aral Sea sacred grid.