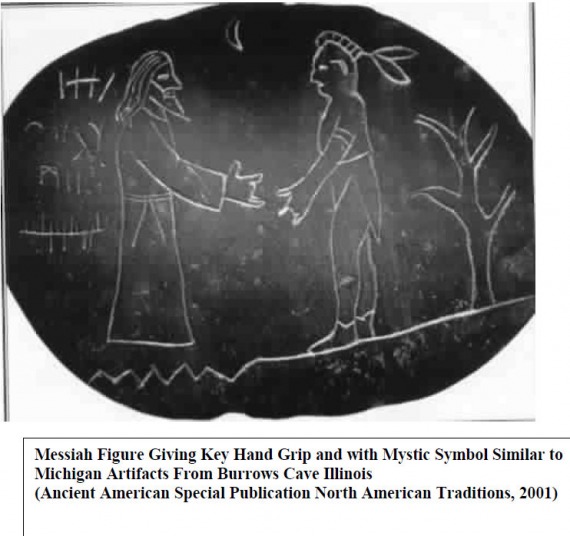 When the Spanish arrived they discovered through ancient rock art, cave paintings, indigenous legends, songs, thousands of books and artifacts found throughout the America’s that aside from Asian, Druid or Celtic, Egyptian or Phoenician’s, people of ancient Hebrew faith came to share knowledge, mine copper and trade with the indigenous nations as well.
In addition, the Spanish apparently discovered around two thousand years ago a white bearded healer and teacher, who wore long white robes and was called by various names according to tribe and location. He traveled throughout Polynesia and the America’s by ship accompanied by disciples he apparently left with some of the tribes when he moved on to other lands.
In 1963, L. Taylor Hansen; archaeologist, anthropologist and geologist wrote a book called “He Walked The America’s”. Hansen spent twenty-five years researching legends from different tribes all over the America’s, combing through museums, ruins, libraries and conversing with experts on folklore.
As quoted from the back of her book, “Almost two thousand years ago a mysterious white man walked from tribe to tribe among the American Nations. He came to Peru from the Pacific, he traveled through South and Central America, among the Mayans into Mexico and all of North America, then back to ancient Tula, from whence he departed across the Atlantic to the land of his origin. Who was this white Prophet who spoke a thousand languages, healed the sick, raised the dead and taught in the same words as Jesus Himself?”
Whether you believe there was a "Jesus" or not, as a race of intelligent human beings, are we so ignorant and arrogant as to believe that Jesus shared his knowledge only on one tiny little corner on this entire planet? How could we honestly believe His teachings were limited and reserved for ONLY the Middle East area? This is akin to us believing we are the only life forms in existence and there is no other life beyond us on planet Earth. This is when I feel compelled to mention it would be a good idea to tuck our egos into bed and wake up.
Jesus was a planetary teacher who came here between the cycles of Aries and Pisces knowing full well at the end of the 2000 yr cycle of Pisces, humanity and our solar system would be completing the precession and entering this Great Shift. According to plan, 2000 years ago it was crucial to seed and spread the teachings and knowledge across the planet for the sole intention of awakening humanity on a global level. Therefore, humanity has had the last two thousand years to integrate this knowledge and tools for spiritual development. Needless to say much of the original teachings of His Peace Religion in the Mid-East and eventually the majority of everywhere else were hidden, destroyed or twisted to serve a different plan for humanity; one of servitude to those in power.
He came to the America's to integrate the teachings after He completed His mission in the Mid-East ending with the crucifixion. However, He knew and foretold the Red Race that a new generation of the White Race would be coming to them and when they did, they needed to hide this sacred knowledge deep in the jungles, in caves and within their architecture until a time when humanity reached the end of the precession and this Great Shift. That at this time there would be enough who awakened to understand, honor and respect this knowledge, that it would be greatly needed by humanity to assist in their preparation for a new world.....a world of peace.
So here we are! Humanity is once again in between cycles 2000 yrs later, this time...... the end of Pisces and the beginning of Aquarius...the time that has been foretold and talked about for the last 2000 years plus.
In Hansen’s introduction of “He Walked The America’s”, she begins by stating; “These are the legends of The Healer. This is the drama of Mahnt-Azoma or Tl-Acoma The Mighty, sometimes called Kate-Zahl, The Prophet. It is the story of a saintly white teacher, whose hands performed miracles of healing and who strange eyes, grey-green as the ocean, looked down the vistas of the future. His symbol  woven into blankets, carved upon the walls of canyons, burned into pottery and danced in dances. His name is given to rushing rivers, tall white mountains, sacred forests and springs of never ending water.”
According to what Hansen learned, this Pale Prophet brought seeds for melons, squash, medicines, spices, clothing, chocolate and other foods to the America's. He taught them many ceremonies, baptismal and sacred marriage rites, most importantly, he taught them ceremonial dances to replace their belief in sacrifices.
Hansen goes on to describe his route; “The Prophet moved from South America up the Mississippi and by rivers throughout the Eastern states. From Michigan he went to Canada and from there to the Pacific Coast. Moving from there to the Pacific tribes by way of Grand Canyon and Havasupai, he went to the Pueblos and then down the Chichihua Valley to Tula and later Cholula. He apparently sailed with the merchants to South America. Returning, he left for the Mayan Empire and finally departed from Cosmul Island by ship for an island lying toward the sunrise over the sea.”

It is my strongest intention by sharing these legends, to remind those who already carry this knowledge and to inform those who do not. It is all part of putting the truth out there. Most people have never heard of these legends nor seen any evidence of anyone, let alone Jesus being in the America's prior to Columbus.
On the pages following in this section are excerpts from Hansen’s book on various tribes sacred legends regarding this mysterious man and the knowledge he left them for future generations and who foretold of this time we are now in.

From “A Reminder From The Ancients of The Broad Land”;
“We are the Ancients and our skin is red; with us, the Sacred Color. These are our legends told about the campfires on winter’s evenings. When you string them together, remember our great pride. Now we are looking down and our feathers are drooping. Tell the legends so that our young men will realize that the ancestor threads run in many directions. Through the tribes we have captured and with whom we have intermarried there is a red thread which runs back to the Red Land long sunken in the Destruction. There is a thread which runs far to the south where the mountain tops touch the sky and the Thunder Bird moves through the lightening’s. There is a golden thread which touches Tollan, The Mighty and the beautiful Tula, while through some of our mothers there is a white thread to the words of The Prophet. Tell my young men to listen.”
Asa Delugie, War Chief of The Mescallero Apaches.

“This is our book - these legends of Ancient times. They are of the blood which courses through our veins. We of the Seven Tribes of the Black Tortoise once had a Dream of Empire. Yet father back through the cycles of Time we knew the Great Wakon-Tah, but we forgot His words. These legends should help us to look up and remember.”
Shooting Star, of the Hunkapa Dacotah.