The Archangel, Perseus and the Galactic Center

After completing the Hendaye Cross and Harney County material, I wondered about the Angel in Harney County and if I drew a line to her opposite or sister location, what land would she cross? So I drew a line from the Angel in Harney County to her opposite spot in the Aral Sea Sacred Grid, but instead of crossing the ocean and land like I assumed, Google Earth immediately took the line up over the North Pole to it's location. The alignment goes right through Polaris(pink dot), Draco and Ursa Minor as shown below. Consequently, star speaking........it is from Perseus to Hercules, who was Perseus' great great great grandson.
Since the day I found the Angel I wondered why her alignment was true North, while her eye focus was 90 degrees East.
Please keep in mind this Northern alignment continues to Hendaye Cross in France and then to Peru. So either way,  the SE ancient route originating from the Angel through the America's or following this Northern alignment, they both lead to Peru and the Sirius tetrahedron. 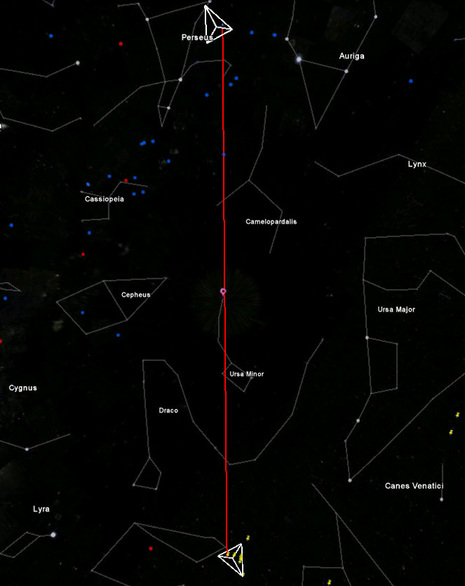 Angel site to opposite Angel site
While staring at the above star map I noticed the Northern alignment was in Perseus' hand as if he was holding a staff or rod. I put all the stars of Perseus on the earth map and outlined Perseus as shown below. Now, it finally seemed to make perfect sense the Angel would be aligned North......Perseus is holding the northern rod or pole from the Angel to Hercules sword as seen above! I was left speechless on this one!
However, I also noticed Perseus' arm was extended reaching out towards the Pacific, so I followed the alignment. 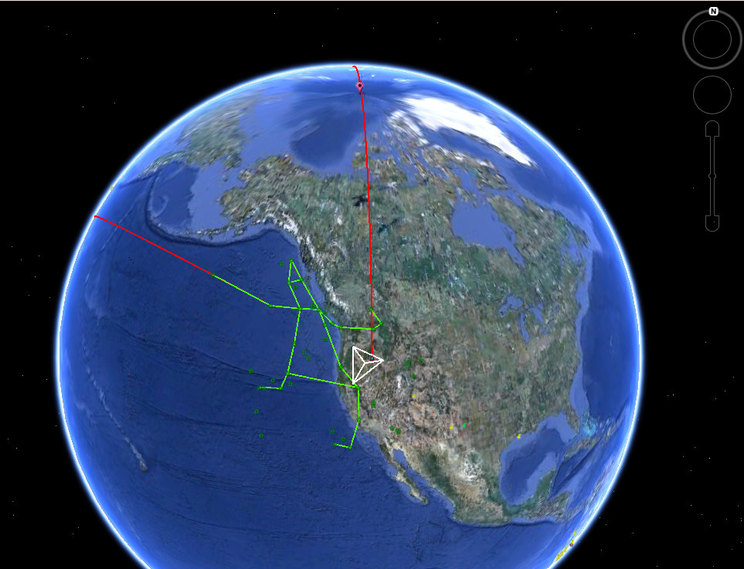 And as you can see it crosses the Pacific into the Indian Ocean.

Directly into the Galactic Center location on Earth! 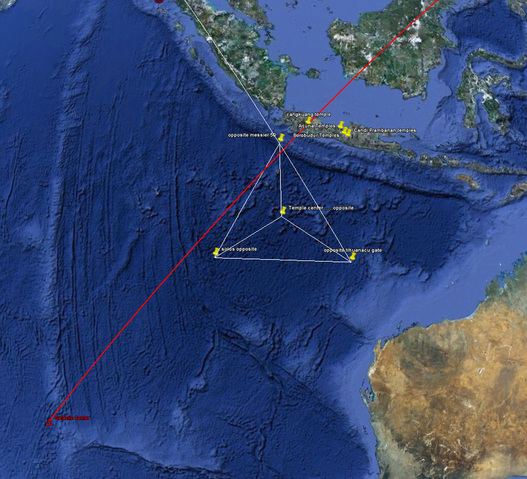 Galactic Center location on Earth
Where the Great Healer Ophiuchus is! 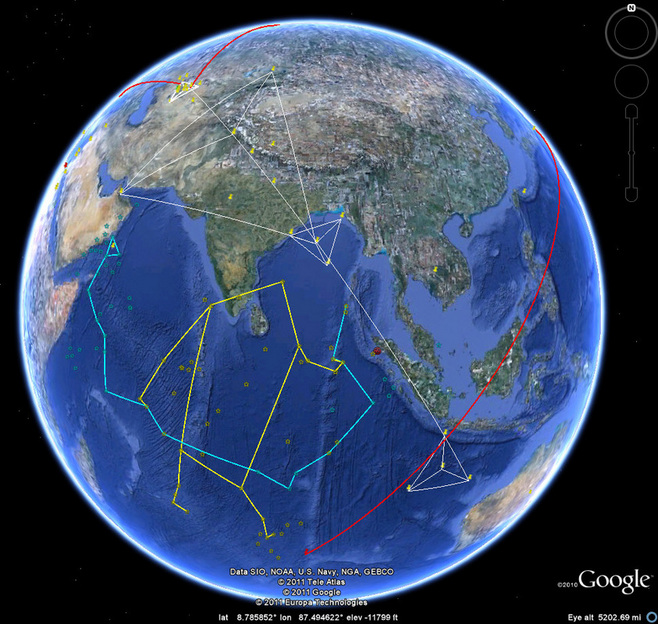 I found it extremely interesting Perseus' arm alignment goes right through Indonesia and the tip of the opposite tetrahedron to the Sirius tetrahedron in Peru, which would be Messier 50. In Java, where the tip of the tetrahedron is located, it goes through an area where there are numerous ancient temple cities such as Arjuna, Cangkuang and Borobudur.
What I also found interesting is the ridge in the Indian Ocean as seen above, to me it looks like the Milky Way with the Galactic center at the foot of Ophiuchus where the Keplar Supernova is. The tail of the Serpent points north to the opposite ancient route line where the Andaman Islands are, not too far from the epicenter of the 2004 Indonesian tsunami(red dot) and where they are still experiencing high seismic activity.
And then to make it even more interesting.........the Serpents head is in the Gulf of Aden, exactly where some believe is a stargate.
And then I found this......................
According to wikipedia:
The Perseus Arm is one of two major spiral arms of the Milky Way galaxy. The second major arm is called Scutum–Centaurus Arm. Perseus Arm begins from the distal end of the long Milky Way bar.[1]
The Milky Way is a barred spiral galaxy with two major arms and a number minor arms or spurs.[1] The Perseus Spiral Arm, with a radius of approximately 10,700 parsecs, is located between the minor Cygnus and Carina–Sagittarius Arms.[1] It is named after its proximity to the constellation Perseus.
There is speculation that the local spur known as the Orion–Cygnus Arm, which includes the solar system and Earth and is located inside of Perseus Arm,[1] is a branch of it, but this is unconfirmed. 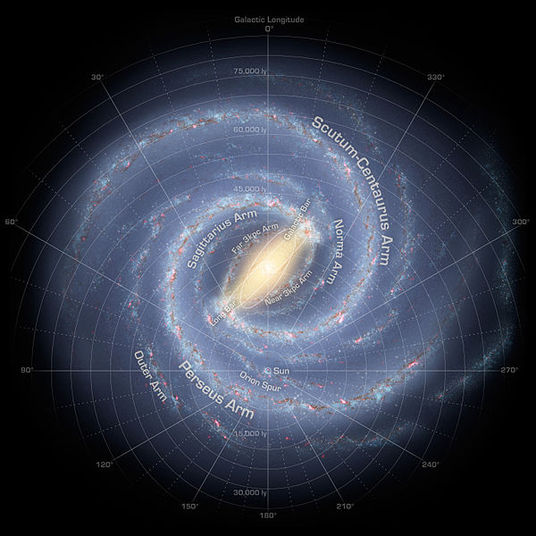 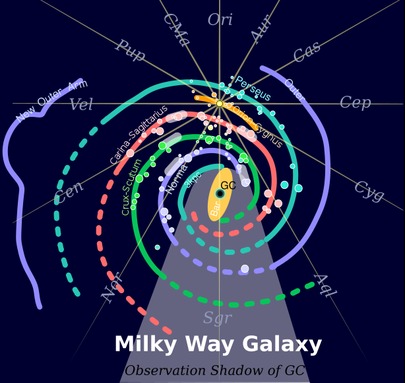 Perseus Arm in Galactic Center 2
Spiral arm of Milky Way looms closer than thought Measuring the distance to the spiral arms can be particularly tricky. This is because astronomers can only measure the speed of an astronomical object in terms of how fast it is moving towards or away from the Earth. Comparing this speed to theoretical models, which assume the objects travel on circular paths around the centre of the galaxy, allows astronomers to deduce the object's distance from Earth.
Astronomers using this technique had previously estimated the distance to Perseus, the arm immediately beyond the Sun, at more than 13,000 light years. But other researchers arrived at half that distance using a method that compares the apparent brightness of massive, young stars with estimates of their intrinsic brightness.
Now Xu's team has used a third technique - 100 times more accurate than the other two - to conclude the Perseus arm is indeed relatively close, at just 6400 light years from Earth. 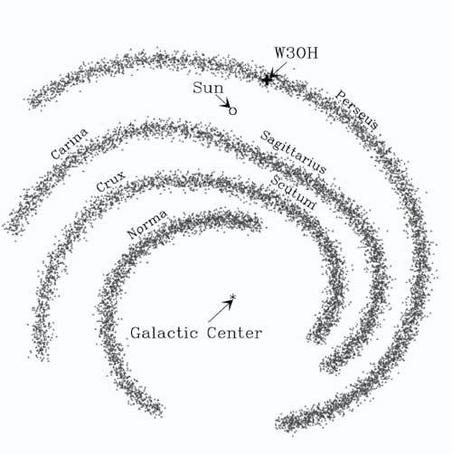 The Milky Way is made of four main arms curving around its centre - astronomers measured the distance from Earth to a star-forming region called W3OH inside the Perseus arm (Image: Y. Xu et al/Science)

One day I was curious to see the alignment from Sirius to Pleiades so I drew the line. What I didn't anticipate was this alignment goes through Orion's belt, specifically Alnitak, the brightest star in Orion's belt. 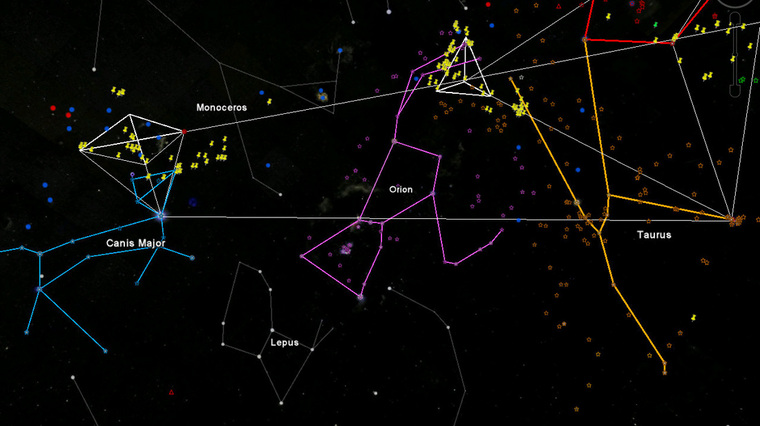