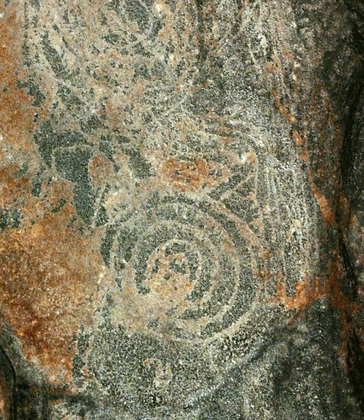 Spiral Image 1 Bottom five ring spiral 900 feet wide
The spirals and circles were the birth of my adventure and it began out of curiosity when I spotted the blurb on Google about some circles found in Oregon by someone using Google Earth. So I downloaded Google Earth and began to cruise around the area of the circles.
After hours of looking at these concentric circles, spirals and lines that connected to more spirals, to me, it felt like they were "telling a story" somehow. In my opinion, when comparing them to actual ATV marks, they were too perfect and massive to be caused by ATV's, not to mention the appearance of their age from the patina.
In the image to the left, Spiral image 1, the bottom spiral measures over 900 ft wide.
To the left image below, Spiral image 2, it is a closeup of the top circle in Spiral image 1, measuring 300 feet wide.
In the right image below, Spiral image 3, there are four lines that drop down 1919 feet into another spiral with four rings, measuring 540 feet wide, then three more lines extend another 780 feet, coming together.

I will return to the spirals, for they relate to the "Hatman" and the "Shaman Mural". Please move on to the next page, "The Hatman".