The other day I was reading about the magnificent configurations at Markawasi in Peru and they mentioned Dr. Ruzo, who discovered the site and spent much of his years studying them. Dr. Ruzo pointed out that four of their main configurations were all aligned with the four cardinal points and formed a cross.
Well, I wondered if by any chance something like that was laid out at the ancient site in Harney and by golly it does!
Just like in Markawasi, this cross in Harney is formed by four of the main configurations.

Alignments are as follows:

Here is the fascinating aspect to the alignment of the cross, the only way it aligns correctly to the four cardinal points is if the planet is aligned Southeast instead of North. Please see Harney Cross aligned North below. This would have put Hawaii as the north pole.

Coral Reef Development: History in the Making
Article by Joel Simon
http://www.seaforyourself.com/Articles/SDsep96art.html
"Fossilized corals from the Cretaceous period, some 100 million years ago, are found at 50º north latitude, roughly equivalent to Vancouver, London, and the southern tip of the Aleutian Islands. Conversely, similarly dated corals extend to only about 20º present south latitude promoting theories that the earth rotated on an axis far different than today. Using the same techniques, corals from the Ordovician times, roughly 500 million years ago, indicate that the North Pole may have been near Hawaii and the South Pole off the coast of West Africa!" 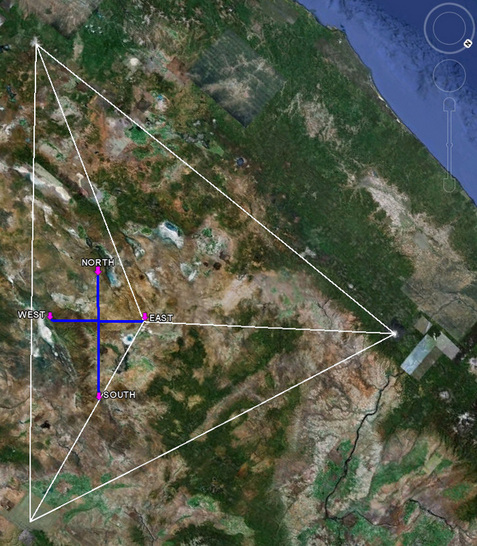 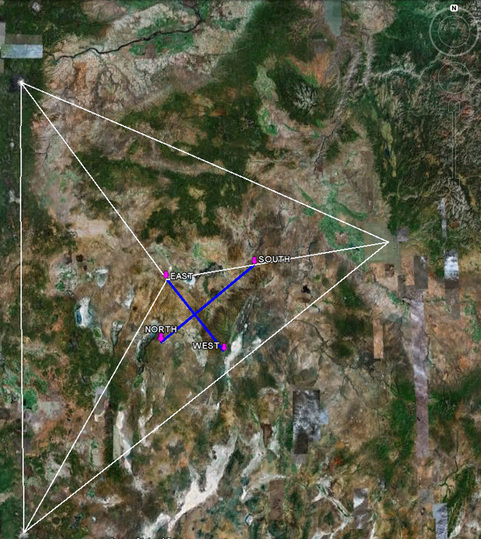 Harney Cross aligned North
I then began to feel curious about the configurations and where they were looking to or aligned with pertaining to the cross.  I began at the East point of the Cross where the two faces are, which lie in the center of the tetrahedron-sacred grid. Both of them seem to be looking West to the Wall of Faces. 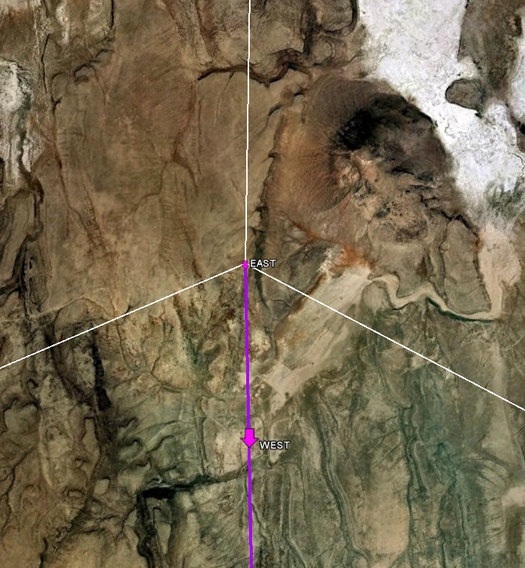 The purple line shows the two faces from their Eastern point looking west to the Wall of Faces where the ridge is on the edge of the ancient lake (where pink line ends). 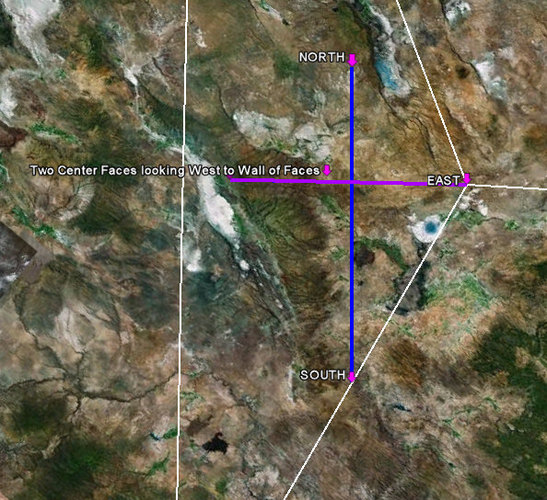 Two Faces from East looking West to Wall
I thought okay, if I am doing everything pertaining to this cross alignment in a Southeast alignment on the planet and the two faces and center line of the Cross are facing West (if the planet was aligned North the line would be going Southeast just as the ancient route from the Angel) then they could possibly align with Sirius.
As soon as the alignment leaves the Wall of Faces at the West end of the Cross, it begins to tip just a fraction South to Sirius. 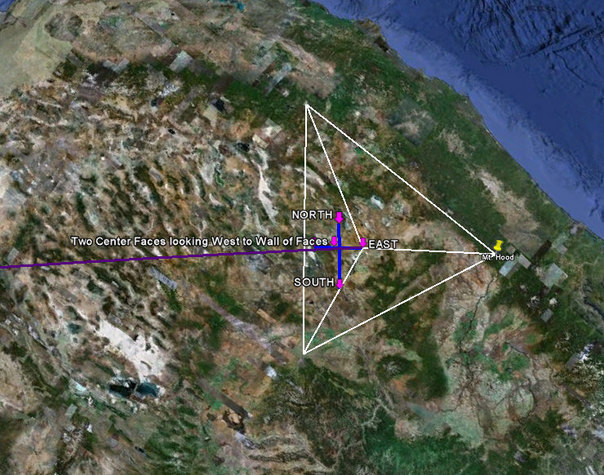 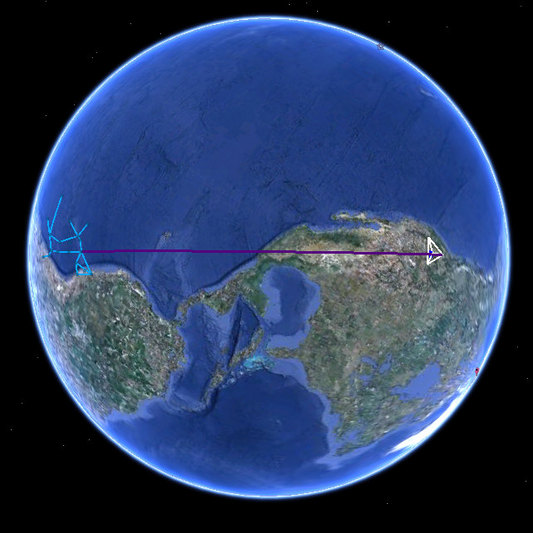 Cross alignment and center of Sacred Grid/Two Faces to Sirius
So naturally I looked in the Eastern direction through the Cross passed the center of the Sacred Grid and two faces and I learned it went straight to Mirphak, the brightest star in Perseus.

Cross center alignment with Mirphak
The second Cross alignment below is the Wall of Faces from the West point of the Cross looking much to my surprise to the Hatman in the North point. The blue line is the East/West line from the two faces to the wall of faces. 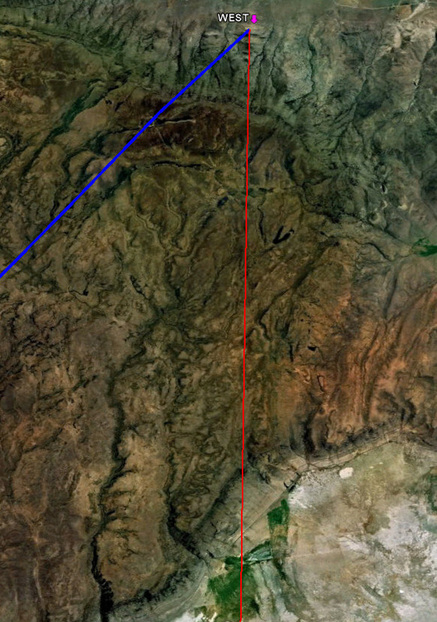 Wall of Faces looking to Hatman
Instead of the Hatman facing directly North as I thought he did, he is facing or aligned a little to the Northeast, just enough to let us know his direction is not going North, but heading Northeast..... seen in Hatman Facing Northeast image below. The blue line below is the North/South Cross line.
So my question is what if anything is in the Northeast aside from the tablet? 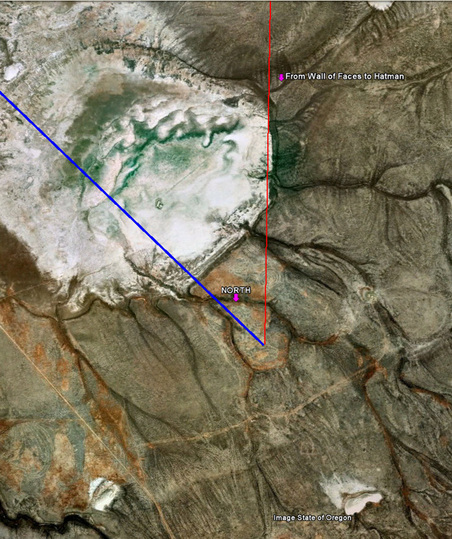 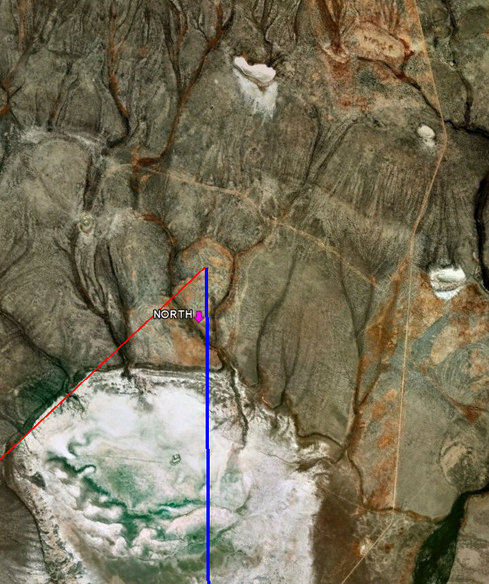 Hatman facing Northeast
I noticed the "tablet of script" in the upper right hand corner of the image. I also noticed the alignment (red line) from the Wall of Faces and wondered if the alignment from the Wall of Faces would actually line up with the tablet and it did.
Not only did it line up, but I measured the continuation of the Wall of Faces alignment beginning at the Hatman's eyes to the tablet and discovered it is exactly 2.07 miles long........just as the Hatman and Angel measures 2.07 miles long!!
I cannot help but feel a twinge of curiosity of the little co-inky-dink of this, in addition discovering the site on 2/07/2010!
So what is 2.07 all about?
To begin with 2+7 = 9 and nine is an extremely significant number..........as is 72. 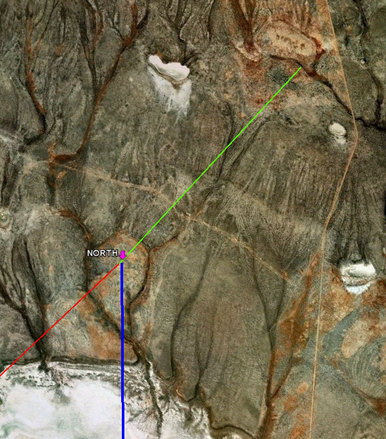 2.07 miles from Hatmans Eyes to Tablet following Wall of Faces alignment
I got to looking at the connection above and had a thought to put Perseus on to see if any of the stars landed near the cross. Instead I noticed the alignment from the Wall of Faces to the Hatman to the Tablet might have aligned with one of the stars in Perseus and indeed it did, the Wall of Faces and Hatman seem to be looking to Algol, the second brightest star in Perseus.
Below the planetary alignment is still SE as you can see in the navigator wheel to the upper right.
Was the planet at this angle at one time? 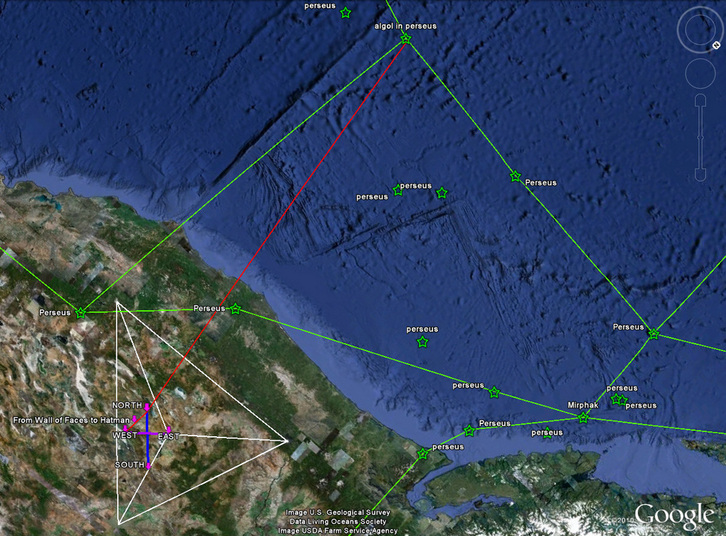 Wall of Faces to Hatman to Tablet to Algol
The South tip and base of the Cross comes to the Angel. In this SE planetary alignment, she is lying East-West and faces South, but is looking Southwest. 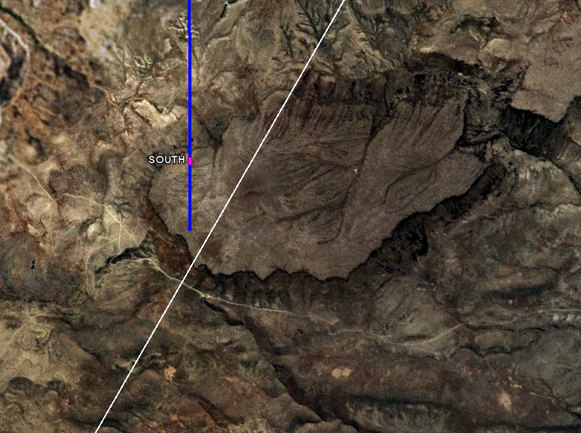 Angel in South point lying East-West facing South
So from the Southeast planetary alignment, I followed the Angels eye focus on it runs right into one of the younger baby goats (kids) in Auriga. 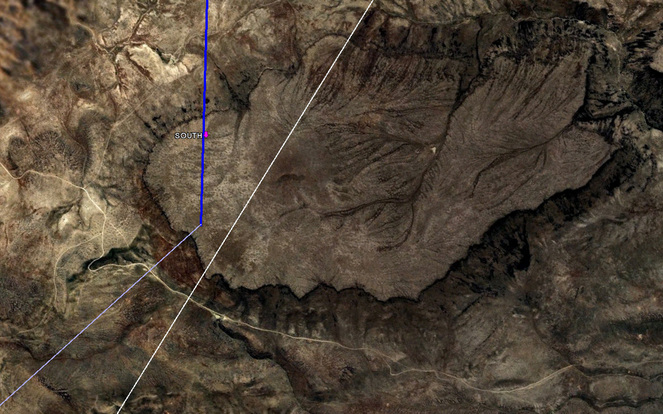 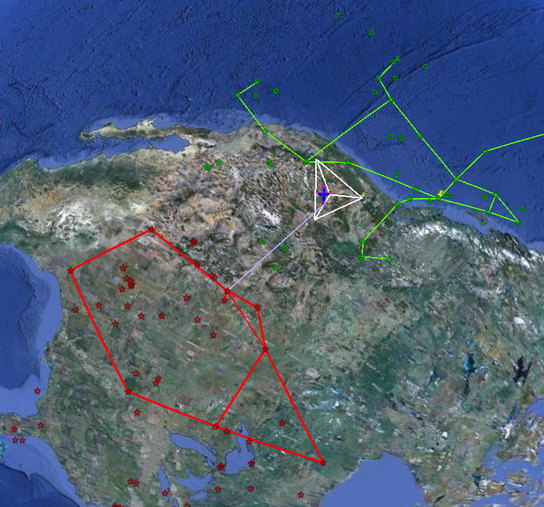 Angel looking to Auriga Kids
The Harney Cross alignments in accordance with the planetary alignment still being Southeast are as follows: 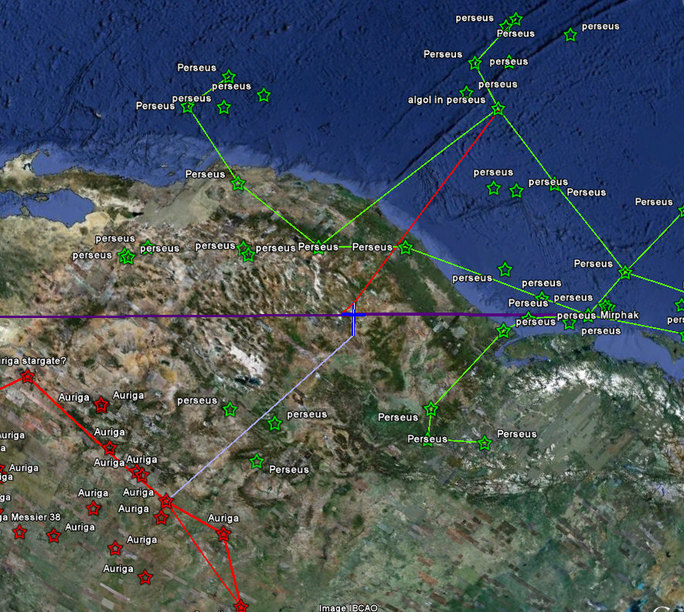