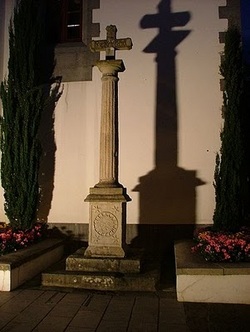 The Great Cross of Hendaye is a stone cross located in the town square of Hendaye in the Pyrenees-Atlantiques , in southwestern France.
Based on the book, The Mystery of the Cathedrals by Fulcanelli, Jay Weidner and Vincent Bridges co-wrote, The Mysteries of the Great Cross at Hendaye: Alchemy and the End of Time regarding the codes left on the Hendaye Cross and how the information connects to sacred alchemy, The Great Shift and Peru.
I haven't read the books yet, but did watch the movie they produced called, "Timewave 2013". While I watched the movie I began to take notes as I noticed some of the information seemed to be correlating to my own research with Harney County in Oregon and it's connection to Peru.
Jay Weidner came up with some astonishing anagrams from the Latin inscription on the cross and wonderful clues about the Shift of Cycles we are currently in:

Latin Inscription on Hendaye Cross………
"Ocruxaves Pesunica"………
Fulcanelli’s description of the phrase is describing "a place of refuge ‘and we learn that a country exists, where death cannot reach man at the terrible time of the double cataclysm’."
Anagram: "Ocruxaves Pesunica" = Inca cave Cusco Peru ......... and cueva is also there (Spanish for cave)

Fulcanelli noticed that this inscription is unique and important because of the misplaced S at the end of OcruxaveS.
So when the original Latin inscription is separated it looks like this: "O Crux Ave Spes Unica", which is translated to, “Hail O Cross, the Only Hope.”
When they did an anagram on the Latin inscription it came up, "Ave X urcos", which means, "Hail to the cross of Urcos"
According to Weidner in, "A Monument to the End of Time", the "ocruxaves pesunica" engraving really means "the secret concerns a cross and a snake which somehow measures the 12th part".
Fulcanelli believed that this phrase is a clear reference to the cosmic cycles and alignments spelled out on the pedestal. Hence, Fulcanelli felt that the letter S, “which takes on the curving shape of a snake (note that spes, hope, reversed is seps, or snake) corresponds to the Greek khi (X) and takes over its esoteric meaning.” In addition, Fulcanelli informs us “that it is the heliocoidal track of the sun, having arrived at the zenith of its curve across space, at the time of the cyclic catastrophe.”
I had this nagging feeling there was more to the Latin inscription, so I decided to have some fun doing some anagrams and found these.
Ocruxaves Pesunica.......... “ Curvacious Expanse”!

The Mayans speak of an opening in the center of the Milky Way galaxy. And from this center a ladder emerges and from this ladder a serpent rope appears. Riding upon this serpent rope an enlightened Being or group of Beings appear.  If we follow the term riding the serpent rope we see throughout ancient records many enlightened beings riding on serpent ropes and we see many of these beings entering earth through gateways. We could also use the term “wormhole or stargate is going to open from the galactic center” instead of a serpent rope.
Ophiuchus is the serpent holder and lies in the center of the galaxy.  I believe this is the sign that lies over and governs all the other 12 signs…the sacred 12 and 1.

I noted in reference to “the secret concerns a cross and a snake which somehow measures the 12th part” may very well relate to Ophiuchus, who is the serpent holder, who is in the center of the galactic cross in our “12th part” of this particular cycle. 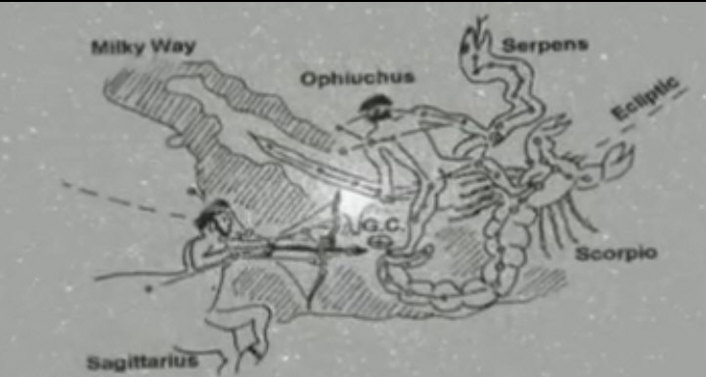 When Jay Weidner came up with "Hail to The Cross of Urcos", he looked up the word "Urcos" and sure enough discovered there is a small village in Peru named Urcos, 20 miles south of Cuzco and there stands a cross by a lake known as Lake Urcos.
I connected the two crosses from Peru to France and noticed my opposite tetrahedron to Oregon, the Aral Sea tetrahedron, was in the Northeast area and wondered if the location in Hendaye France might align to the Aral Sea tetrahedron and by golly it did…… 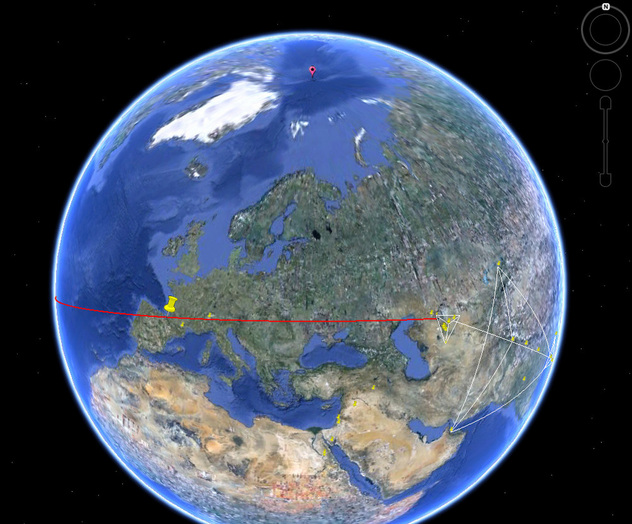 Alignment originating from Urcos Cross in Peru to Hendaye Cross in France...large yellow tack... to opposite tetrahedron to Oregon
So I sat feeling a little dumbfounded at this connection because my intuition was telling me there was more than this alignment and the Peru co-inky-dink . I reflected on all the numerous synchronizations that have occurred since I discovered this ancient site in Oregon, how my logical mind said no so often, yet I continued to follow my inner guidance and time after time it proved to be correct.
I sat at my computer and wondered about the above alignment. Aside from this alignment, could it be possible the ancient route from the Archangel to Peru was also somehow in connection with the Hendaye Cross to Peru? Could it be possible the Archangel was somehow connected to the Hendaye Cross as far fetched as that may sound?
So I ran an anagram using a generated anagram tool online on "Hendaye Cross" and "Harney Co." came up….Needless to say, I was quite shocked since Harney County is where the Oregon site is!
I sat gazing into the letters of "Hendaye Cross" and did the anagram the old fashioned way to confirm what the online tool did...........in a way a "pinch myself moment", but as I was doing it I discovered something.
HENDAYE CROSS BECAME “HARNEYS CODES”!!!  Using every letter.................
Absolutely stunned, I ran an anagram on "Harney County Angel"…….What came up?  ”A Holy Entrance” of all things.
Immediately I recalled the woman in New Mexico who can read petroglyphs from a higher state of consciousness. When she read the script on the tablet the Hatman is looking at, I saw a pyramid outlined in red and heard the words, "On All That Is Holy".
A few weeks went by and while working on the star systems and their alignments I felt a strong impulse to do the anagrams again. When I ran "Harney County Angel" again I noticed the letters "y,u,n,g" were left over from "A Holy Entrance", so instead of blowing them off like I did the first time, I looked online to see if there was such a word as "yung", but there wasn't, instead there was "yunga".
"Yunga" according to Wikipedia:
"In Quechua, the word “Yunga” means “Warm Valley”. "The Yunga  is one the Natural Regions of Peru and Bolivia. It is formed by valleys, fluvial mountain trails and streams where people cultivate native plants like the Canistel or eggfruit tree, the lucumo tree, the cherimoya or chirimoya, the guava or guayabo and the avocado or palta. Like the surrounding areas, it has characteristics of the Neotropic ecozone. It is rainy, humid, and warm. The Afro-Bolivian community is concentrated there from the days of slavery. The World Wide Fund for Nature has delineated three yungas ecoregions along the eastern side of the Andes. The northernmost is called the Peruvian Yungas, located entirely within Peru and stretching nearly the whole length of the country. The Bolivian Yungas lies to the south, mostly in Bolivia but including part of southern Peru. The Southern Andean Yungas begins in southern Bolivia and continues south into Argentina.
In addition, there is also a famous road called Yungas Road and originates in La Paz near Tiahuanacu.
"The North Yungas Road (alternatively known as Grove's Road, Coroico Road, Camino de las Yungas, El Camino de la Muerte, Road of Death or Death Road) is a road leading from La Paz to Coroico, 35 mi northeast of La Paz in the Yungas region of Bolivia. It is legendary for its extreme danger and in 1995 was christened as the "world's most dangerous road".

So, I did the anagram again, this time using all letters in "Harney County Angel" and it came up as "Yunga Holy Entrance"........aka "Peru Holy Entrance" where the ancient route originating from the Angel aligns.
What are Harney's Codes? I believe that is a many layered question, so I did another anagram this time only using "Harney Angel".
What is she communicating aside she is a Holy Entrance to Peru?

Then I really dove into the world of anagrams! I have found anagrams are an extremely interesting world, one of which only speaks the truth pertaining to the past, present or future. Back in 2004 I was on my way home from the grocery store one day and asked my Soul to explain more about the shift of consciousness programming from the mid-east to the mid-west that corresponds with this Shift of Consciousness humanity is going through. I was told to do an anagram on the word "Missouri". When I got home I found an anagram tool online. So I typed in Missouri and what came up? Sirius, Osiris and Isis. I was sold ever since.

Symbolic Words in below anagrams
Hyena = Dog/Sirius
Ash = land
Sands = land
Hydra = Hydra Star System
Alcyone = Pleiades Star System...........In Incan the Pleiades refers to "Seed Scatterer or Sower".......http://www.crystalinks.com/pleiades.html.
Hen = Feminine or Pleiades........... In Old English Pleiades refers to "A Hen and her chicks" and in Europe, they still refer to women as Hens.
Yang = Divine Feminine
Synod = (from Greek synodos, "assembly, meeting, conjunction of planets"), in the Christian church, a ecclesiastical council, local or provincial assembly of bishops and other church officials meeting to resolve questions of discipline or administration.)
Agency = Councils or Hierarchy?
Hanger = What would a "Hanger" be considered out in the Boonies? Maybe a Cave?

As you can see below there are numerous anagrams. Most may not have anything to do with anything, but I found them pretty interesting so I thought I would share them.

So what is all this saying? What is it the anagrams might be possibly telling us?