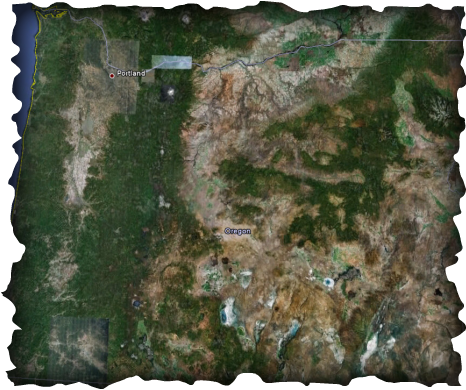 This ancient site is located near Paisley Cave, Oregon, where they found the oldest human remains (feces) discovered in the America's to date, 14,300 years old I believe. When I spoke with a representative from the Northern Paiute Council, she agreed, the monolithic configurations I initially found and showed her in February 2010 dates back prior to their ancestral history of 16,000 years.
As the days turned into months scrutinizing the state of Oregon through Google Earth looking for more configurations,  I wanted to test this even further so I went cruising around northern California, southern Washington and eastern Idaho. I thought okay, if these configurations were only a freak phenomenon from Nature, then I might be able to find them elsewhere, aside from what is already on the net.  To date, I have not found any.
I have no doubt there is much more out there on this beautiful planet, however and this just might be a personal thing, while cruising around I never felt the "pull" like I did in Oregon. This pull I speak of was a nagging feeling I kept experiencing to go in a certain direction and when I got to that location, though I may have not seen it right away, I could feel it in my bones something was there........like the Shaman Mural.......it took me months of continually going back before I walked into my office one day and clearly saw it on the screen.
In my opinion, the entire planet is an actual living library and holds infinite mysteries. In addition, all ancient legends speak of this time as the time of truth, when the truth of our history, human potential and lineage will be revealed.
When I was little growing up searching for something I misplaced, my mother always found it immediately, stating, "It was right in front of you the whole time, use the eyes that God gave you Sweetheart"........
"The truth unveiled. For those who have eyes to see, let them see. For those who have ears to hear, let them listen. For those who have neither, let them pass on."

Please continue with my journey beginning with the "Spirals" page, which you will find under the Ancient Land of The Pacific Northwest drop down menu.